FRANKFORT, Ky. (Jan. 2, 20-15) — Gov. Steve Beshear this week announced a $500,000 Community Development Block Grant (CDBG) to construct a new building to house ambulances in Pendleton County. The facility will replace the county’s current ambulance building, which is inefficient and experiences frequent flooding from the nearby Licking River. 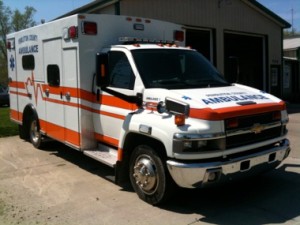 Pendleton County’s current ambulance building is located in downtown Falmouth, on a landlocked parcel of property in the 100-year flood plain. When the building floods, the three ambulances are forced to move to temporary facilities, and workers have to leave behind certain equipment due to size, weight, and transport logistics. The Licking River bisects the county, so when flooding occurs, the ambulances must separate so that both the northern and southern areas of the county are served. This potentially leaves one half of the county exposed to inadequate services.

The new ambulance facility will be located out of the 500-year flood plain, west of Falmouth on KY 330.  Its design incorporates highly efficient lighting, insulation and a computer monitored heating and cooling system, all of which will save money on energy use. The new building will be more than twice the size of the current facility, allowing for an additional ambulance bay, ample storage for equipment, and a hazardous materials decontamination room. It will also have accommodations for staff and a space to conduct meetings as well as Kentucky Board of Emergency Medical Services (EMS) mandated trainings.

The $500,000 CDBG grant is administered by the Department for Local Government and funded through the U.S. Department of Housing and Urban Development (HUD).