Will lead to increased speed limits

Beshear said the Kentucky Transportation Cabinet (KYTC) will take bids in November on three construction projects to complete the widening of U.S. 68/KY 80 from Cadiz to Lake Barkley in Trigg County.

The speed limit will be raised on most of the stretch of KY 80 already four lanes wide from Mayfield to Aurora in Graves, Calloway and Marshall counties.

“Modern, four-lane highways are indispensable for business, tourism and other commerce,” Beshear said. “The widening of the last two-lane stretch of ‘68/80’ will complete a modern new corridor across roughly the western third of Kentucky, from Mayfield to Bowling Green.”

The two routes—U.S. 68 and KY 80—merge at Aurora, in Marshall County, and run as a combined route from that point eastward to Bowling Green. For the most part, it is a four-lane highway. One glaring exception is the segment scheduled for bid letting on Nov. 20 — an 8-mile stretch from Lake Barkley to the western end of the Cadiz Bypass.

Going west from Aurora, the highway splits into two routes: U.S. 68 runs northwesterly to Paducah, while KY 80 dips to the south. KY 80 is four lanes wide from Aurora to Mayfield.

“Travelers and businesses increasingly rely on Global Positioning System technology to plan their trips, and those systems favor routes with higher speed limits,” Beshear said. “Kentucky 80 is a well-built highway. A 65 mph speed limit will allow it to stand out on GPS. And now that the remaining pieces of the corridor are falling into place, the time is right.” 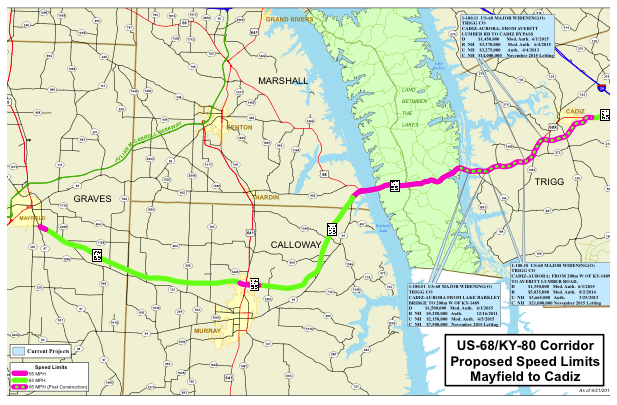