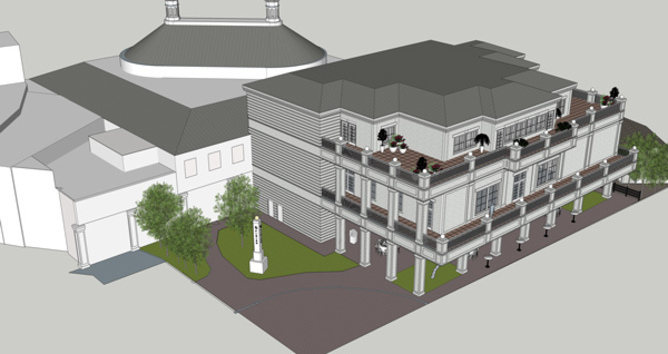 The project will add over 11,000 s.f. of brand new space to the museum. It also includes the renovation of 5,000 s.f. of existing space. It will be the largest expansion of the museum’s footprint since the building was constructed in 1985 and one of the largest renovations since a major refurbishing project following damaging flooding in 2009.

The expansion will provide a greater visitor experience for guests with an emphasis on new exhibit space, featuring the collection of legendary trainer, D. Wayne Lukas. It also creates space to display key pieces of the Bill Shoemaker collection, which has been housed in the museum’s archives for many years. The expanded second floor will also include additional meeting and rental space.

The museum will build an entirely new third floor within the expansion footprint to house administrative offices, a large conference room and storage areas.

On the ground level, a new stable will house the museum’s resident Thoroughbred and companion horse. The area will include seating for educational programming. It also features more than 7,400 s.f. of covered space that can be set for various events, including outdoor weddings, dinners, parties and more. With the addition of the new rental space, the museum will be able to accommodate much larger groups for special events.

Construction will begin this month and will include the demolition of the stable, the relocation of the Finish Line pole and the removal of more than 3,000 s.f. of pavers. Major construction work inside the museum will get underway following Kentucky Derby 144.

“We’ve seen the number of visitors coming through our doors growing consistently, reaching 230,000 in 2017. Building off that momentum, we wanted to create something that would take the Museum to the next level and offer a truly outstanding experience to our guests as we showcase the extraordinary event that is the Kentucky Derby,” Museum President and CEO Patrick Armstrong said.

The museum will remain open to visitors during the duration of the project. The expansion will be completed by November, in time for the 2018 Breeders’ Cup at Churchill Downs.

Following the groundbreaking ceremony, Kentucky Derby Museum employees gave Winston, the Museum’s miniature horse for 22 years, a fond farewell as he headed off into retirement at Old Friends Thoroughbred Retirement Farm in Georgetown, Kentucky. With a final victory lap through the Museum, Winston made his way out the Museum’s front doors for the last time as employees and well-wishers cheered him on his way.

Winston came to the Kentucky Derby Museum at two years old, in the fall of 1995. He’s been the companion horse to more than 30 resident Thoroughbreds, including three horses that ran in the Kentucky Derby, Perfect Drift, Phantom on Tour and Twinspired, as well as Kentucky Derby 135 winner, Mine that Bird.

He’s also thrown out the first pitch at the Louisville Bats game, helped Churchill Downs pick the Derby winner ahead of the race, supported many charitable organizations around town and performed more than 10 marriage proposals with his “Will You Marry Me?” blanket.