FRANKFORT, Ky. — A new group of hospital leaders launched an initiative Wednesday that will seek to encourage Kentucky lawmakers to tackle comprehensive healthcare tax reform in order to fund the state’s Medicaid expansion.

The group, called Balanced Health KY Inc., is a 501c4 made up of hospital leaders from across the state concerned about an expected shortfall in Medicaid funding totaling $200-$300 million over the next two years.

The state’s Medicaid expansion currently hangs in the balance with the Bevin administration’s waiver to customize the way Kentucky’s expanded Medicaid population receives benefits making its way through the courts. (Learn more about the Medicaid waiver here.)

At a press conference on Wednesday, the Balanced Health KY group announced they will be offering tools and help to lawmakers including legal review and an interactive budgetary toolkit in order to encourage healthcare tax reform to fund Medicaid expansion.

The group is focused on reforms to the healthcare tax code in the state, highlighting the Kentucky provider taxes used to fund Medicaid. Balanced Health KY President Riggs Lewis said only five of the 18 categories of the healthcare economy are paying that provider tax currently, with hospitals paying the largest percent of the taxes paid at 61 percent, totaling more than $182 million in 2017.

Categories not paying the provider tax, according to the group, include physician, dental, psychological, nursing, chiropractic, and other services (see the full list in the graph below).

Lewis stated Balanced Health KY is not advocating a position on which of the 18 categories to include or at what rate any category should be taxed in healthcare tax reform but instead are asking lawmakers to take up the issue to ensure a fair system with a tax as low and broad as possible.

Balanced Health KY is made up of a volunteer board of directors made up of hospital leaders from across the state including Joe Grossman, CEO of Appalachian Regional Healthcare, Gerard Coleman, CEO of Baptist Health, Manchester Memorial Hospital CEO Erika Skula, Norton Healthcare CEO Russ Cox, St. Elizabeth Hospital CEO Garren Colvin, Taylor Regional Hospital CEO Jane Wheatley, and Lewis serving as president of the group.

Learn more about the group and their efforts on their website BalancedHealthKY.com here. 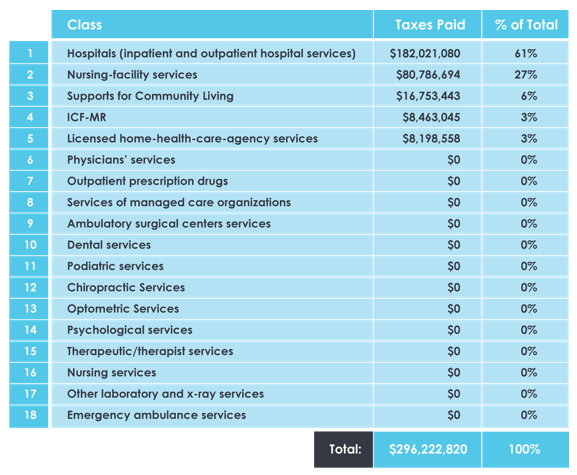