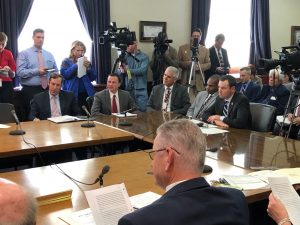 FRANKFORT, Ky. — Two Senate priority bills were passed Thursday through the Senate Education Committee, setting them up for possible passage before the end of the first week of session.

Lawmakers on the committee passed both Senate Bill 8, dealing with tribunal reform, and Senate Bill 3, which makes changes to the site-based school councils and gives superintendents more authority in hiring principals.

Testifying on House Bill 8, bill sponsor Sen. Steve West said the legislation makes changes to the current tribunal structure by ensuring one of the members of the council is an attorney trained in education law.

SB 8 also limits tribunal decisions to upholding or overturning the decision of the superintendent.

In discussing the bill, West said there are very few cases in Kentucky that end up in front of a tribunal and added that shows the cases that do end up there are often extremely egregious and need to be handled in a timely and professional manner.

Dr. Houston Barber, superintendent of Franklin Independent Schools, testified in favor of the bill and stated he believes it streamlines the process while also setting up a fair system that protects both teachers and students.

Kentucky Chamber Director of Political Affairs Travis Burton also testified on the bill adding the support of Kentucky’s business community. Burton said a strong education system is vital to a quality workforce and Senate Bill 8 will help ensure there is an effective teacher in every Kentucky classroom.

Education Commissioner Wayne Lewis stated it is important to put Kentucky students first in every decision made about education and added having this type of fair process in place to remove an ineffective teacher does just that.

Senate Bill 3, sponsored by Sen. John Schickel, also passed through the committee on Thursday. SB3 gives superintendents hiring authority of principals and also equalizes the number of parents and teachers on school councils.

Currently, the councils have three teachers and two parents along with a principal. The bill proposes taking one of the teachers off the council to give parents a more equal voice in the decision-making process.

Both SB 3 and SB 8 now move to the floor for a vote by the full Senate.

The Senate also introduced an education bill as their top priority in the first week, filing a long-awaited school safety bill as Senate Bill 1.

The school safety measure seeks to provide more school resource officers and mental health professionals in schools, create a new position of a “state school security marshal,” require certain personnel to have annual active shooter training, and explicitly criminalize threats and hoaxes made toward schools as second-degree terroristic threatening, among other things.