Home » The Bottom Line: Beshear promises to work toward the common good 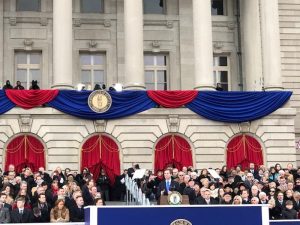 FRANKFORT, Ky. — In his inauguration address from the State Capitol Tuesday, Kentucky Gov. Andy Beshear said the state has an opportunity to look past party politics and work toward the common good as he begins his term. As for his first actions, Beshear said he has reorganized the Kentucky Board of Education and plans to restore voting rights for over 100,000 Kentuckians.

As part of a theme of bipartisanship, Beshear said Kentucky succeeds when the focus is placed on the state’s shared values and when collective interests are placed ahead of personal and political priorities. He stated, “life is better for all Kentuckians when we stop treating each other as enemies because that’s when the government is at its best.”

Beshear announced he plans to restore voting rights for over 100,000 men and women in Kentucky on Thursday. He said his faith teaches forgiveness and he believes all deserve to participate in democracy. By taking this step, Beshear said, it shows that “we all matter.”

Before the speech, Beshear already issued an executive order reorganizing the state board of education, setting the stage to oust Kentucky Education Commissioner Wayne Lewis.

Beshear also re-emphasized his priority to give Kentucky teachers a $2,000 raise in the first year of his administration. He added it’s crucial to ensure adequate funding for education in order to remain competitive.

Another issue he highlighted was the state’s Medicaid expansion, implemented under his father, former Gov. Steve Beshear. The Bevin administration had pushed for changes to the expanded program. However, the new governor said he is committed to keeping the exchange as it was enacted.

Beshear wrapped up his speech by stating the inauguration gives Kentuckians a chance to celebrate freedom and democracy and recommit to Kentucky’s success.