Since 2010, the Kentucky Health Issues Poll (KHIP), sponsored by Interact for Health and the Foundation for a Healthy Kentucky, has reported Kentucky adults’ views about a statewide, smoke-free law. Support for a state law in Kentucky that would prohibit smoking in most public places remains steady. In 2014, nearly 7-in-10 Kentucky adults (66%) favored this type of law, while nearly 3-in-10 opposed the law (29%). 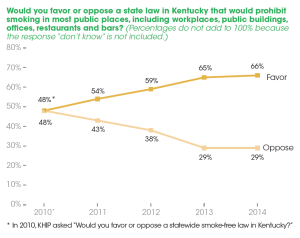 The highest levels of support for a statewide law were in two areas of Kentucky that have had long-standing local smoke-free ordinances. As to overall views, 75% of adults in Lexington and 74% Louisville area adults favored the law. Majorities in Western (65%), Northern (63%) and Eastern (54%) Kentucky also favored a statewide smoke-free law.

Laws that provide for smoke-free indoor air in workplaces, restaurants and bars are called comprehensive laws. In the United States, 26 states and the District of Columbia have such laws1; Kentucky does not. 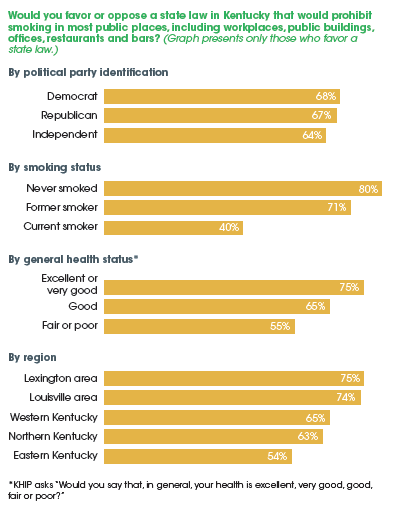