LEXINGTON, Ky. (June 14, 2017) — Lexington ranks seventh among best cities for new college graduates, according to study by SmartAsset, a personal finance technology company headquartered in New York. Lexington was ranked 18th in 2016. Cincinnati was ranked No. 1 in this year’s study. 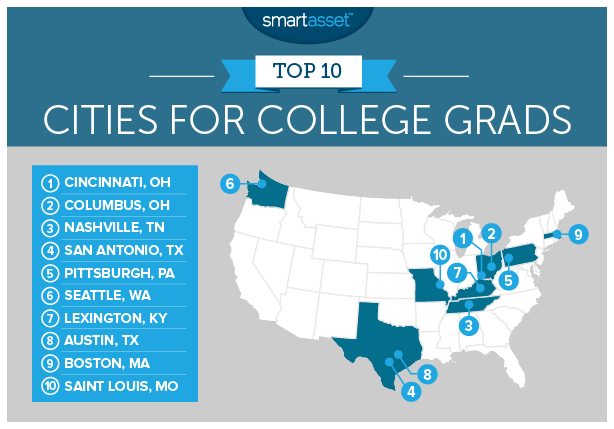 SmartAsset looked at the 108 largest cities in the U.S. and considered how each would suit a recent college grad, ranking cities based on how affordable, fun and job-friendly it is.

SmartAsset said of Lexington, “Residents with bachelor’s degrees are seeing more jobs this year, with the unemployment rate down by 2 percent, despite the drop in job postings. On average college grads are earning more than they were last year, as well.”

“Luckily, the rent remains affordable, landing Lexington in the top 25 in this metric overall,” said SmartAsset. “In fact, the overall cost of living is basically right at the national average, placing it as the 19th-best out of all the cities we looked at. That leaves you some nice space in your budget to head to the growing number of entertainment and dining businesses in the city. Plus, Lexington’s bars snagged the second-best Yelp scores in the top 10.”

SmartAsset calculated the data for all the above metrics for each city. Then they ranked each city according to the metrics included in each category. They averaged the rankings of those metric scores across each of the three categories. For example, the most fun city would earn a score of 100, while the least fun would score 0. To find the overall index, they averaged the jobs, affordability and fun scores for each city.