Auto manufacturers, their hundreds of suppliers and many dozens of dealerships provide a prominent driving force in Kentucky’s economy, especially the past three decades. The past few years alone, billions more has poured into major expansions and new facilities across the commonwealth. Lesser known, however, is that demand for more fuel-efficient vehicles is a chief reason the good news is happening.

To fuel development of these vehicles, Toyota, Ford and GM are investing billions of dollars in new factories, expansion projects at existing facilities and thousands of new jobs.

“One of the major ways auto makers are trying to improve their vehicles’ fuel mileage is by ‘lightweighting,’ ” said Jack Mazurak, communications director for the Kentucky Cabinet for Economic Development. “You reduce the weight of the vehicle, and it becomes more efficient. Consequently, a lot of the part suppliers are also moving to lighter weight parts.”

Kentucky has a distinct advantage over many other states in that it is one of the world’s major aluminum-production centers, with more than 150 metal facilities employing over 18,000 people. The commonwealth also has an auto-parts supplier network of more than 500 facilities.

For the Bluegrass State, aluminum companies – many of which are automotive-related – announced 93 new-facility or expansion projects since the beginning of 2014, according to the Kentucky Cabinet for Economic Development. Those projects total more than $2.72 billion in corporate investment in fewer than four years, well above the approximately $1 billion announced from 2001 to 2013.

“The automotive industry in Kentucky continues to experience significant growth, buoyed by the recent substantial investments being done or planned by our three OEMs in the state,” said Dave Tatman, executive director of the Kentucky Automotive Industry Association. “Our state is seeing not only substantial growth from our existing automotive manufacturing plants, but very significant investments being made as companies choose to locate new facilities throughout the commonwealth.”

With that in mind, let’s take a closer look at some of the biggest automobile plant expansions across the Bluegrass in the last year:

In April, the Japanese company announced a record $1.33 billion would be invested in Georgetown-based Toyota Motor Manufacturing, Kentucky Inc. It is the most any automaker has invested in a Kentucky plant, and the second largest in history.

TMMK is receiving a new paint shop and already has completed comprehensive equipment and technology upgrades to produce vehicles on a new platform, making them lighter, stronger and more efficient.

“Toyota New Global Architecture (TNGA) is about exciting, ever-better vehicles for our customers as it will improve performance of all models, including increased fuel efficiency, more responsive handling and a more stable, comfortable feel while driving,” said Jim Lentz, CEO of Toyota Motor North America, in a news release.

In late September the company announced it is bringing hybrid powertrain production to the U.S., which will include a $121 million expansion of 2.5-liter engine production at TMMK.

This year’s two projects added to a $530 million investment at the plant announced in 2013, in part to support the addition of Lexus production. This brings Toyota Kentucky’s investment in the last four years to approximately $1.98 billion.

More than 130 Japanese-owned automotive-related facilities now operate or plan to locate facilities in Kentucky, mainly due to TMMK. The plant began producing the all-new 2018 Camry in June 2017, the first TMMK vehicle on the TNGA platform. Since its first vehicle rolled off the line in 1988, TMMK has produced more than 10 million Camrys.

In June 2017, Ford announced it will invest another $900 million into its Louisville-based Kentucky Truck Plant to support production of the 2018 aluminum-alloy-bodied Lincoln Navigator and Ford Expedition. The new-generation SUVs’ move to high-strength aluminum-alloy bodies cuts weight and increases capability, performance and fuel economy.

That investment follows a $1.3 billion investment and 2,000 new jobs announced in December 2015 that prepared KTP for production of a new generation of aluminum-alloy-bodied 2017 F-Series Super Duty Trucks. The latest expansion brings KTP’s employment to 7,850.

The 2017 Super Duty trucks used an all-new high-strength steel frame and high-strength, military-grade, aluminum-alloy bodies for the first time, a move that followed the company’s switch in 2014 to aluminum bodies on its top-selling F-150 pickups – saving up to 350 pounds per vehicle.

“With the introduction of the all-new Ford Super Duty, America’s best-selling heavy-duty pickup, we expect to continue growing our truck leadership,” Joe Hinrichs, Ford president of The Americas, said in a 2015 release. “Through this investment, we are continuing to show our commitment to Kentucky and city of Louisville, as well as bringing to customers industry-leading trucks to help them take care of business and earn a living.”

KTP opened in 1969 and currently produces F-250 to F-550 Super Duty pickup and Chassis Cab trucks, as well as the Ford Expedition and Lincoln Navigator SUVs. Ford’s LAP plant opened in 1955 and produces the Lincoln MKC car and Ford Escape compact SUV. The company’s Kentucky relationship dates to 1913 when it opened a plant in Louisville to assemble the Model T.

General Motors has  also announced substantial investments in its Kentucky plant over the past few years. In June 2016, the company said it would spend $290 million to upgrade its Bowling Green Assembly plant to modify its Corvette assembly operations with new technologies and processes.

GM previously announced in December 2015 it would invest $44 million in the plant beginning in early 2016 and would add 36 jobs to increase capacity thanks to demand for its high-performance Z06 model. The investment came on the heels of $439 million in upgrades announced in May 2015 that included a new paint shop.

Corvette production began in 1981 in Bowling Green following assembly first in Flint, Mich., and then St. Louis. Each location has been an exclusive home of the Corvette, contributing to its distinction as the world’s longest-running, continuously produced passenger car.

While companywide fleet fuel economy standards at the federal level are driving upgrades at major automobile plants across the nation, Kentucky in particular has been a choice for corporate investment and expansion, especially among metal producers and manufacturers.

Just this year from January to August 2017, there has been $3.9 billion invested in Kentucky locations and expansions in the automotive industry, resulting in more than 3,100 new jobs. This already far exceeds the total 2016 investment of $934.5 million.

Of major significance, there has been  more than $7 billion invested in new Kentucky locations and expansions across all major industry sectors so far in 2017, and the automotive industry accounts for more than half of that. State investment announcements set a new annual record before the end of May.

The first reason for the growing health of this sector is that the Bluegrass State already has a large automotive industry with well-established supply lines; its more than 500 facilities employ over 100,000 full-time workers.

And Kentucky has major advantages from a geographic, logistics and distribution standpoint.

“If you think about Kentucky’s position geographically, we’re a gateway between the Midwest,” Mazurak said. “We’re between Michigan and Ohio, which have been the traditional automotive hotbeds, and the South, which in the past 20 years has taken off with foreign auto plants.”

As a result, many companies have decided to locate or expand in the Bluegrass State since being a supplier in the center of these automotive regions makes shipping auto parts to all the other plants both easy and efficient.

Kentucky has also set itself apart by the improvements it has made to its manufacturing workforce, which has been a focus of Gov. Matt Bevin’s administration. Through new and expanded apprenticeship programs, the state has concentrated on creating and growing a pipeline of skilled employees to better serve the automotive industry for generations to come.

“Companies are getting a reliable supply of well-trained employees,” Mazurak said. “When companies in other states see that, they may feel they would be better served being located the middle of the two automotive hotbeds.”

Finally, Bevin and the state General Assembly have been working to improve Kentucky’s business climate, making it more effective from a cost standpoint.

Early this year the General Assembly passed and Gov. Bevin signed right-to-work legislation that put Kentucky into the running for additional new projects.

Very quickly such an opportunity arose: In April Bevin and industrialist Craig Bouchard announced Braidy Industries would build a $1.3 billion aluminum rolling mill near Ashland in northeast Kentucky. The 550-job mill is expected to create 1,000 construction jobs and drive economic growth in Eastern Kentucky, where the need is greatest.

“Our industry enjoys significant advantages in our state that have made us the envy of many other states engaged with the automotive sector,” said Tatman. “Our exceptional workforce, low cost of energy, highway systems, logistics providers, and geographic location all work to our advantage. However, we must continue to focus on improving the overall climate for business here that has attracted these new investments.”

Tatman noted that chief among the challenges moving forward is the availability of qualified workers for the thousands of job openings in Kentucky’s automotive industry. Other issues include maintaining its transportation infrastructure, as well as developing a tax structure that works to address the issues of the state, while delivering the best tax consequences for the state’s business partners.

“The Kentucky Automotive Industry Association will continue to work on behalf of our 500 or so automotive operations and their 90,000-plus employees to achieve these goals,” Tatman said.

Esther Zunker is a correspondent for The Lane Report. She can be reached at [email protected] 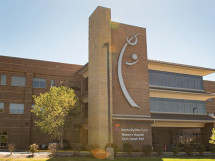 Creating a Market for Art